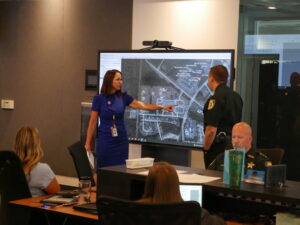 Behind the locked doors of the Clay County Emergency Operations Center (EOC), a member of the Clay County Sheriff’s Office speaks quietly to an officer from the Clay District Schools Police Department. One of them leans across the aisle and asks a staff member to pull up a page on her laptop, and the multiple large monitors in the room are suddenly filled with an aerial view of Thunderbolt Elementary. A member of the Clay County Fire Rescue Department studies a document at another desk as the Sheriff and one of her Chiefs huddle at a table in the corner of the room. Everyone has a task to perform, but all attention turns to the door as the special guests arrive for the morning session. The next ninety-plus minutes are pivotal to the safety for every student, teacher, and staff member on the Thunderbolt campus in the upcoming school year.

While students and teachers have enjoyed a summer vacation away from campus, the Clay County Sheriff’s Office has been meeting with multiple law enforcement agencies, Fire Rescue, county Emergency Operations officials, and school administrators to implement a comprehensive blueprint entitled C.H.I.R.P.– the County Hazardous Incident Response Plan. This acronym represents a powerful emphasis designed to bring a unified response to any threat at area schools, and this new tool will be a game changer should a major event occur at a Clay County school. First implemented by Sheriff Cook when she was a police chief in Atlantic Beach, this program has been expanded to include all public schools in Clay County. On this day, the Sheriff looks on as Officer Steve Mills, the Safety Specialist for the Clay County District Schools Police, speaks to a group gathered at the Clay County Emergency Operations Center (EOC). In attendance at the morning meeting is Amy Vann, Principal at Thunderbolt Elementary, and her Assistant Principals Tracey Finley and Jeffrey Miller. After Officer Mills lays out the direction of the session, Assistant Chief Scott Mooreland assumes the task of gathering detailed information about the layout and operation of the Thunderbolt campus. This is a scene that has repeated itself for every school in Clay County, and the information gleaned is crucial to implementation of a detailed database that could reduce response times during an emergency. Though many details of the C.H.I.R.P. cannot be shared publicly, the data shared during these closed door meetings range from the current enrollment and student pickup policy to the potential locations for a Command Post and helicopter landing zone. As the officials and administrators study aerial photographs on the numerous screens around the room, the extensive experience of Fire Rescue and Law Enforcement helps thrash out the specifics that could easily be overlooked without this high level of engagement. As an evacuation and reunification plan is formulated for Principal Vann’s campus, the discussion turns to the number of medically fragile students currently attending the school. Because of the special needs of these students, additional manpower is assigned to guarantee that these students are kept secure and calm should the need arise. At the conclusion of the nearly two-hour meeting, a rough-draft of the response plan is confirmed, and the Sheriff assures the Principal and her team that the plan will be polished and distributed to key individuals who will be in charge during an emergency event. As the Principal packs up to leave the EOC, she shared her impression of the event that she has just participated in. “What I learned is that the first 45 minutes of a major event like an active shooter are chaotic, and it’s encouraging to know that we have a plan in place for evacuation, extended lockdowns, and other needs. This was very informative,” shared Vann.

After a brief break for lunch, Sheriff Cook and leadership from numerous agencies meet with the media to issue a strong public statement about the seamless coordination and partnership among the agencies in an emergency response. Not surprisingly, the media has numerous questions about the recent school shooting in Uvalde, Texas and the scathing national criticism of the police response. While not addressing the criticism directly, Sheriff Cook reiterates the promise that has become the theme of every local agency: If an active shooter event occurs in Clay County, there will be no delay until the shooter is neutralized. “Stop the killing, stop the dying,” is the mantra repeated regularly, and every plan centers on this theme.

As the media filters out of the EOC, Sheriff Cook and Officer Mills begin an afternoon training session with Principal Sarah Brennan of Tynes Elementary School. Though the format of this meeting is the same as the morning meeting, the information exchanged differs significantly. When her meeting concludes later that afternoon, Principal Brennan shares, “I have been pretty tied in with law enforcement over the years. We even hosted a SWAT team in prior summers to ensure that we were doing all that we could to keep our campus safe. This meeting today is so important because it helps tailor the emergency response to each school. We have 1000 students and our campus is 40 acres in size—that’s quite different from some of the other schools in the district.”

As diverse as each school campus and its occupants, the C.H.I.R.P. for these schools is equally unique. Parents and concerned citizens should be encouraged knowing that emergency officials responding to a major event at any Clay County school will have instant access to the best possible strategy for ensuring the safety and reunification of a student with his or her loved ones. As Sheriff Cook spearheads the project, it is the professionalism, dedication, and experience of school officials and first responders across multiple agencies that make these plans so effective. Yet another great reason to live and work in Clay County!