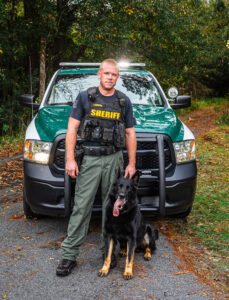 You might think you live in Gator Country, but it is the dogs who rule the day at the Clay County Sheriff’s Office. Apart from J.P., the station mascot and support dog, the Sheriff’s Office has two narcotic detection canines at the jail, two tracking bloodhounds, six dual-purpose dogs (narcotic detection and criminal apprehension), and one electronics detection and emotional support dog tasked with the detection of hidden electronics that may contain evidentiary material, including child pornography.

On this day, we observed K9 Odin and K9 Dante and their handlers, Deputies Ottomeyer and Lowery, respectively, as they displayed their skills at narcotics detection under the watchful eye of Department Supervisor Sgt. Maertz. After attaching some DEA-provided narcotics to the frame of two Sheriff’s Office vehicles, Deputy Lowery pulled K9 Dante from his air-conditioned back seat and performed a walk-around search of both “suspect” vehicles. In a matter of seconds, Dante located and alerted on the hidden containers under each vehicle. Not to be outdone, K9 Odin, followed by Deputy Ottomeyer, also found both samples of narcotics rapidly. While the canines performed their jobs well, it was obvious that the dogs love to play and be rewarded with praise once the job is completed. Equally obvious is the fact that these canines are well-loved and cared for by their handlers.

With experience ranging from two years to more than a decade, the deputies and their Sergeant have faced several situations where these and other dogs in the department played a crucial role in detection, apprehension, or tracking. When asked what he has learned during his many years of service, Sgt. Maertz answered, “You have to always trust your dog—he’s got the nose.” As the deputies discussed the best and worst parts of their jobs, Deputy Ottomeyer shared, “The challenge of the search and the reward for completing it successfully is definitely the best part. The tough part is being covered in dog hair all of the time.” For Deputy Lowery, the best part is, “when you find someone who doesn’t want to be found, or someone vulnerable who doesn’t know that they need to be found. The worst part is the bug bites.” Sgt. Maertz added, “These dogs are like children in that they have to be continually trained and encouraged to perform well. It’s very rewarding to watch the dog and handler grow in their skills and relationship together. These dogs are also very high energy. Everyone thinks that they want a Belgian Malinois until they come home and find him on top of the refrigerator.”

In light of the recent severe gunshot injuries suffered by K9 Huk with the Jacksonville Sheriff’s Office, Sgt. Maertz explained that each handler is trained as a combat medic for their dog. They also carry an extensive medical kit (donated by a non-profit K9 foundation) that has supplies for every possible emergency including overheating, snake bites, and bullet wounds. “We also send handlers to specialized training where they learn to provide treatment using a high-tech K9 simulator,” shared Maertz, “We never stop training.” As Clay County grows in population and demand, the K9 department understands that the need may soon arise for expansion to include explosive detection and cadaver dogs. Regardless of potential future challenges, this team is ready to put their training and commitment to work at a moment’s notice. Before our time with the dogs ended, we asked K9 Dante and K9 Odin if they would ever consider working with felines. After a brief silence, both dogs growled and mumbled, “No comment.”