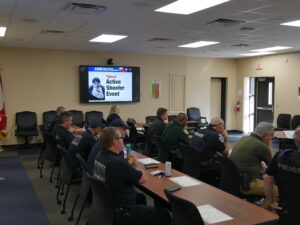 It can take place at a school, a church, a grocery store, a nightclub, or anywhere that people are gathered. When it occurs, a community is forever changed. It is called an active shooter event, and it can happen in an instant. After the initial shock wears off and the grief sets in, the event often becomes politicized. Families, already ravaged by loss, are seldom allowed to process their hurt because of the 24-hour news coverage and speculation. Even when the shooting takes place hundreds of miles away, waves of shock and fear spread across our country as we question our safety in places where we once felt secure.

At the Clay County Sheriff’s Office, we strongly believe that the best response to an active shooter event is to end it quickly and decisively. While we cannot predict when or where a shooting will occur, we constantly train, plan, and prepare to meet an active shooter with swift and overwhelming force. As you read this, somewhere in Clay County our deputies are probably holed up in a classroom with law enforcement officers from surrounding agencies and members of Fire Rescue to coordinate the response for this type of threat. Though we cannot share the specifics of a law enforcement response, we want the citizens of Clay County to know that our deputies are trained under a concept that has become our mantra: “Stop the killing, stop the dying.” If an active shooter event occurs in our county, our deputies and partner agencies will not stop, hesitate, or retreat until the shooter is killed, captured, or contained. Each of these brave men and women understand that they must race toward the source of the gunfire until the shooter is neutralized and the killing has stopped. Immediately after the threat has ended, law enforcement personnel and Fire Rescue have developed a strategy to ensure that the wounded are rapidly located, stabilized, and transported from the horror of the scene to the well-notified and prepared medical personnel waiting for their arrival at area hospitals.

While these coordinated response teams train continually for the very worst situation, the skills instilled in them are designed to ensure the very best outcome. The interaction of law enforcement and Fire Rescue will bring unity and precision to a typically chaotic and confusing scene. Ultimately, this comprehensive training is intended to save lives and lessen the trauma of an otherwise traumatic experience. Although many might believe that the most difficult aspect of an active shooter event is dealing with the initial threat, our deputies and responding partners understand that Active Shooter Incident Management (or ASIM) doesn’t end when the threat is neutralized or even when the victims are transported. A successful response also includes a full investigation of the event, reunification of families, and the timely and accurate distribution of information to the community through local media outlets and social media. Often, these peripheral operations take place over the course of several hours, reach across numerous locations, and involve dozens of personnel. The Clay County Sheriff’s office is determined to continually prepare for these responsibilities.

Prevention of an active shooter event is a difficult and imperfect concept that involves (among others) the community and the venue in a multi-faceted approach, but the response to these types of events can and should be coordinated, consistent, and controlled. Sheriff Cook is committed to protecting the people of this amazing county, and she will continue to invest the necessary resources to position Clay County for the best possible response to any potential threat.