Sheriff Cook entered the law enforcement profession as a Patrol Officer in 1992, working as a beat cop on the street.  With earned promotions throughout her 26-year career at JSO, she retired as a 3-star Director, and 3rd in command, from the Jacksonville Sheriff’s Office, a 3,300-person agency and the nation’s 25th largest police department.  As Director of Patrol and Enforcement, her responsibilities included the strategic deployment and activities of over 1,000 first responders and community relations personnel and direct management of a budget of over $100 million.  She also oversaw the over 1,000 special events that occurred in the Downtown area each year.  She served as the agency lead on collective bargaining and routinely worked with elected officials while promoting the law enforcement mission. 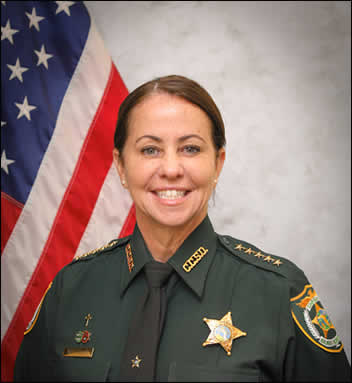 In early 2020 Sheriff Cook retired from the Atlantic Beach Police Department and began her campaign for Sheriff in the County she was born and raised in.   Michelle beat out 5 other candidates to win her primary and was declared the winner when a write-in candidate withdrew.  On September 1, Governor Ron Desantis appointed Michelle to Sheriff of Clay County to complete the term left vacant by her predecessor and on January 5, 2021, Sheriff Cook was officially sworn in to start her first term.

Sheriff Cook currently serves on the following boards and committees:

Recognized for her extensive experience and leadership in law enforcement, Sheriff Cook has built a reputation of being a firm, yet compassionate law enforcement leader whose integrity and genuine management style bring respect not only from her work family but also the community she serves.

Michelle is married to Don, and they have 6 children between them, 4 of which were adopted out of the local foster care system.

– Served as the Incident Commander during SWAT/Negotiator call-outs

– Commander of the Intelligence Unit; represented JSO on the Joint Terrorism Task Force, North Florida Fusion Cell, and served as key agency liaison to US Marshals and FBI

-Instructor/Consultant for an organization that provides training nationally for Active Shooter Incident Management.  With her extensive experience and training combined with her hundreds of documented responses to critical incidents, she is one of the lead instructors for the “Command” portion of the training curriculum and provides crucial input and feedback on course development

Michelle has earned numerous awards for her service, including: