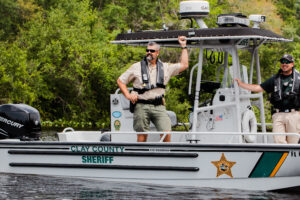 The envious observer can only contemplate the feeling, but the true boater experiences the moment. When the ramp is quiet and the water is calm, the feel of a boat gliding across the glassy lake, river, or creek makes the delay since the last boat day well worth the wait. Depending on the season, you might even catch a foggy mist rising off of the water as the boat idles out from the ramp. On this humid summer day, however, there was no mist, and, truthfully, the boat ramp was busy. All of the parking spaces were full, one trailer was double-parked, and tensions were running high as the late-arriving boaters jockeyed for position. Deputies Maher and Morrell from the Clay County Sheriff’s Office Marine Unit remain polite as they line up their trailers and take their turns at the ramp. Though they typically have no one to help them with the launch, the deputies seamlessly and rapidly secure their boats to the dock, load up the necessary gear and technology, and begin their day on the water as they idle away from the ramp. A paddle-boater slows the departure as he flags down Deputy Maher and thanks him for the recent tip on the navigation of a nearby sandbar, but soon the throttle is pinned down and the boats are racing across the St. Johns River towards Black Creek. Though the ramp was full, only a few boats are seen skimming along the water. If the clouds building to the east are any indication, the summer storms may roll in sooner than forecast.

As the twin boats slow for the No Wake Zone near the Black Creek Bridge, Deputy Morrell activates his blue lights and carefully brings his boat alongside another boat idling near the bridge. The last thing that a boater wants to do during their precious time on the water is to pause the fun for an inspection, but Deputy Maher explains that the inspection of a boat is essential to ensure that boaters remain safe. In recent years, Deputy Maher has responded to boating-related deaths in Clay County, and he makes it clear that he and Deputy Morrell are committed to doing all that they can to prevent these types of tragedies. When asked how boaters typically respond to an inspection stop, Maher shares, “Most boaters understand the importance of the inconvenience, and we often end up having a nice conversation during the brief stop. If they have all of the proper safety equipment and documentation, then we not only get them back on their way quickly, but we also provide them with an inspection decal that will help them avoid inspection stops for the remainder of the year. As long as they aren’t violating some other boating law, they won’t have to see us again until next year.”

Apart from safety inspections, the Marine Unit spends a great deal of time patrolling the waters and watching for violations that could put boaters and wildlife at risk. “A lot of our job involves educating the public about the No Wake and Manatee Zones that exist in all of our waterways,” states Maher. “If someone strikes a manatee with their boat, fees could be as high as $50,000. These zones help give the manatees a chance to get out of the way of boat traffic. The zones around ramps and bridges allow boaters to safely navigate those areas without endangering themselves or other boaters. Occasionally, someone will zip through a zone without slowing down, and that’s when I stop them and have a conversation.” When asked if there are any violations that bring a guaranteed citation, both Maher and Morrell agree that a boat with an occupant under six years old without a proper flotation device is certain to yield a ticket for the boat operator. Deputy Morrell added, “That violation brings a fine of $90 per child. It can get really expensive in a hurry.”

While inspections and boating safety are the primary mission, the Clay County Sheriff’s Office Marine Unit enjoys strong partnerships with multiple local, state, and federal agencies. “We have regular contact with other department’s Marine Units, and we coordinate with the Coast Guard, Navy, Fish and Wildlife, and Fire Rescue. We have also worked with the High Intensity Drug Trafficking Area (HITDA) Teams.”

Whether building rapport with boaters as they chat about a good fishing hole or working with other agencies to conduct a rescue, Deputies Morrell and Maher are committed to ensuring the safety of Clay County boaters and those who visit our treasured waters. To attend a boating safety course, please visit the Boater Safety page under the Safety Initiatives tab at www.Claysheriff.com.