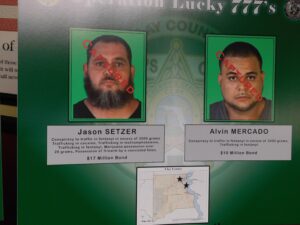 How the story ends: Deep within the walls of the Clay County Sheriff’s Office, Sheriff Michelle Cook, flanked by more than a dozen law enforcement and fire rescue officials from multiple agencies (including Florida Attorney General Ashley Moody), addresses the media, “We are here today to highlight two different cases.  The first case involves a large seizure of illegal, dangerous drugs that crossed over into several counties here in northeast Florida. The second case, which is separate from the first, involves the arrest of a subject for his involvement in the death of an individual from a fentanyl overdose.”

In front of the Sheriff is a table covered with cash, firearms, professionally-packaged drugs resembling popular snack items, and a representation of enough Fentanyl (over 8kg) to potentially kill, according to Attorney General Moody, four million people. The fake Fentanyl is used because the risk of handling the real Fentanyl is too great. Posters around the room tell the story of the extent of the arrest and massive contraband seizure. Jason Setzer and Alvin Mercado were arrested for trafficking narcotics in a drug and currency enterprise that stretched from Clay County to Los Angeles, California. Dubbed Operation Lucky 777s, the arrest is just another reason why Attorney General Moody has joined with other state attorneys general to request that the federal government declare Fentanyl a weapon of mass destruction. As Moody describes the depth and width of the Fentanyl crisis in our state, she shares two chilling statistics. “Half of the pills seized in this state are laced with Fentanyl, and more Americans have been killed by Fentanyl than those who died in the Vietnam War.” As the press conference continues, one detective shares that there is strong evidence that the Fentanyl was smuggled from Mexico across the southern border of the U.S., and, as is well established, is being supplied to Mexico by China. 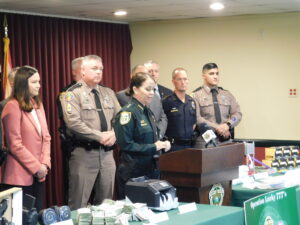 In the second half of the press conference, Sheriff Cook announced the manslaughter arrest of Michael Edgar Stanley II for the sale and delivery of Fentanyl to Aleksejs Kovilov. Kovilov was found in his home deceased from an overdose. After an exhaustive investigation, deputies learned that Stanley had been paid by Kovilov through a cash app, and the two had conducted what would ultimately be a deadly transaction in the bathroom of a local retail store.

In addition to the details of both of these cases, the Sheriff took some time to thank the community for continuing to come forward with information regarding drug issues in Clay County…and that is where the story begins. The arrest of Setzer and Mercado resulted from an investigation that originated in July. A tip from the Florida Highway Patrol triggered the investigation, and that tip led detectives to contacts in Clay, Nassau, and Duval counties. Those contacts eventually established the connection through the postal service to California. In the arrest of Stanley, an acquaintance of Kovilov was able to verify the narcotics connection between the victim and dealer.

In many narcotics arrests, it is a tip from a concerned citizen that helps detectives connect the dots and catch those who are pushing poison onto our streets. Although these cases aren’t typically solved immediately after a complaint or tip, it is important for members of the community to understand that these tips are not taken lightly, and they are not in vain. Numerous members of the Clay County Sheriff’s Office are tasked with the important mission of navigating the dark and dangerous world of narcotics trafficking, and those members are dedicated to bringing the bad guys to justice. Together with the watchful eyes of neighbors and business owners, we can do our part to knock down this scourge on our nation. If you have information regarding a drug-related offense, please contact the Clay County Sheriff’s Department at 904-264-6512.